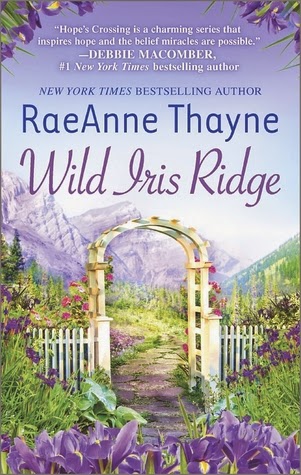 Lucy Drake has returned to Hope’s Crossing. It’s certainly not what she planned to do, but when her high-powered career as marketing director of a top software company crashed as spectacularly as it had risen, she had nowhere else to go. Subleasing her condo and packing up all her worldly belongings, Lucy left Seattle for Hope’s Crossing and Iris House, the silver baron mansion and home of her great-aunt that had sheltered a rebellious teenager seventeen years ago when Lucy’s emotionally distant father and stepmother had been delighted to find someone else to accept responsibility for a troubled adolescent. Annabelle opened her home and her heart to Lucy, and Jess became not just Lucy’s cousin but also her best friend. Annabelle and Jess are gone now, and Iris House belongs to Lucy. Maybe she will fulfill Jess’s dream of turning the house into a bed and breakfast, or maybe she will sell it. Either way, the house will give her a bolt-hole while she figures out what to do with the rest of her life, that is, if she doesn’t burn it down first.

Fire Chief Brendan Caine is astonished to see Lucy Drake when his department answers a call to Iris House late one April night. He’s grateful it’s only a chimney fire that his team can contain. Somehow chaos seems to follow in Lucy’s wake plus Brendan always feels stupid and awkward around her. She may have been his late wife’s relative and best friend, but even though Jess has been dead two years, Brendan can’t forget that Lucy thought Jess could have done better than tie herself to a “dumb jock.” Then there are his kids, Faith and Carter, who adore their Aunt Lucy. Brendan has no doubt that Lucy loves them as well, but he also has no doubt her presence will disrupt their peaceful routine. But he takes comfort in the thought that Lucy’s stay will be a short one in Hope’s Crossing will be short.

Lucy is unsurprised to find Brendan less than welcoming. Despite their shared love for Jess, animosity has always simmered between the two of them, with Lucy telling herself Brendan was more muscles than brain and Brendan telling himself that Lucy is a self-important, career-centered city girl who likes to boast of her achievements. Lucy is surprised the next morning when she confides in Brendan about her job loss, and Brendan is surprised at his impulse to comfort Lucy. These are just the beginning of the surprises in store for them.

Their mutual love for Faith and Carter forces them into one another’s company often enough for them to get to know one another better, often enough for a powerful attraction to grow. But Brendan is uncertain if he’s ready to make a commitment, and there’s the question of whether Lucy can settle in Hope’s Crossing. Of course, the citizens of Hope’s Crossing are not shy about expressing their opinion about the twosome. Lucy’s situation is complicated by an extended visit from her half-sister Crystal who is a near-clone of Lucy’s attitude-burdened teenage self. Throw in a couple of puppies who need a loving home, and you have the makings of a new family--or an emotional disaster.

Wild Iris Ridge is the seventh book in the Hope’s Crossing series. There is nothing groundbreaking in this book, but it offers the likeable characters and warm, realistic setting that have made Thayne a favorite with many readers. Brendan is one of the sons of the appealing, large-hearted Dermot Caine, whose own romance moves forward in this story. Lucy has long been a favorite with Dermot, so predictably he approves of a relationship between her and Brendan.

I have grown weary of the commitment-phobic hero who runs away from the heroine only to have an epiphany that his life without her is worthless. I found it refreshing that Brendan’s reluctance to commit is rooted in his lingering grief over Jess’s death and in his conviction that Lucy will never settle in his small town, a conviction based on a decade of her largely avoiding said town. I also appreciated that Lucy’s return is not a flight from the evil city to the perfect small town. Hope’s Crossing is not perfect, and Lucy’s return made sense because home is where many people instinctively head when their life falls to pieces. Thayne not only makes me like Brendan and Lucy; she also makes me believe in them.

Nine-year-old Faith and five-year-old Carter are not paper-doll kids. They too behave in believable ways, and each has a distinct personality. Teenage Crystal is an interesting character in her own right, and helping her is part of Lucy’s growth. Readers who have followed the series will likely enjoy the glimpses of other Hope’s Crossing characters, whose appearances seem more organic than contrived.

Although Wild Iris Ridge is not my favorite book in this series, it is another satisfying visit to one of my favorite fictional small towns. It can doubtless be read as a standalone, but I recommend that you read the series.

This novel marks the end (at least temporarily) of a series I have enjoyed without exceptions, and I’m sad to leave Hope’s Crossings. However, I’ve already read Snow Angel Cove, the first book in Thayne’s new series by the same title, and the hero is Aidan Caine, brother to Charlotte (Willowleaf Lane), Dylan (Christmas in Snowflake Canyon), and Brendan. Hurray for connections even amid change!

Thayne, like Robyn Carr with her Grace Valley, Virgin River, and Thunder Point series, links a popular series to a new one. Some call it good world building; others call it smart marketing. What do you think?

Hi Janga. Glad to see you back reviewing again! I'm sad that you'll be closing down Just Janga but happy I'll still get your awesome reviews over at The Romance Dish. And I'm all about downsizing and making life easier so I whole heartedly support your decision to lighten your load. The best of luck to you!

I don't care why the authors do what they do when it comes to series I'm just happy they keep them going. I love RaeAnne Thayne's voice and am very excited that we'll be hearing it again even if it won't be in Hope's Crossing. I will say that I'm more apt to pick up a book linked to another book than a stand alone. So, I would say that it is good marketing. :)

Hi Janga.
Regularly writing 2 reviews a week does sound a bind, especially when written to your very high standards. I have benefited greatly over the years and would love to see you continuing with an occasional review when you come across something really outstanding ... 5 stars plus. But as Darwin understood, everything has to evolve and adapt.

To express my appreciation for your wonderful insights and understanding of the genre, I have adapted some words by Karen Sunde, Elizabeth Browning and Herman Hesse:

To love reading romance is to receive a glimpse of heaven,
For although a love of reading may not make the world go round,
love is what makes the ride worthwhile.

If I could but reach up and hold a star for every time you made me smile,
I would have the whole milky way in the palm of my hand.

If I now know what love is, it is because of you!

Thank you Janga, for lighting the way. :)

Thanks, Irish. I will definitely still be reviewing, just not on a regular schedule. I like Thayne's voice too, and I think you will enjoy Snow Angel Cove. I'd love to see her do what Carr did with the Grace Valley characters and slip in an occasional update on Hope's Crossing. :)

Aww, Q, that's so sweet. Thank you, my friend. You have been my most faithful reader. I hope you know how much I appreciate you.