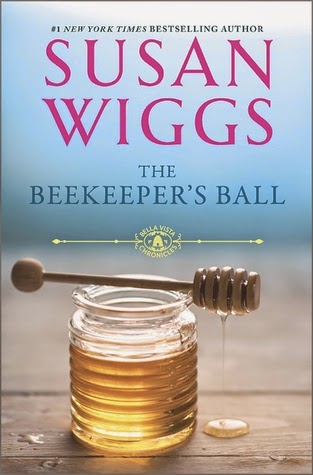 Isabel Johansen is feeling overwhelmed. She wants the wedding she is planning to be perfect in every detail. Not only is it the wedding of Tess Delaney, the half-sister Isabel has only recently discovered, and Dominic Rossi, a long-time neighbor and family friend (The Apple Orchard), but it is also a prelude to the opening of Isabel’s destination cooking school. Once Isabel dreamed of becoming a celebrated chef at an elite restaurant, but she has exchanged that dream for one rooted in the place that has been her home and her sanctuary for all her life. The discovery of a family treasure has given her the funds to turn Bella Vista, the family hacienda near Archangel, California, into a place where she can teach people to cook, using her recipes made with ingredients grown locally, most on Bella Vista land, and share the beauty of Sonoma country with her students.

Her desire to use Bella Vista products sends her to the beehives. When she finds a hive swarming, she puts on the beekeeper’s protective gear and prepares to capture the hive, hoping that expert help, which she has requested via text, will arrive in time. She thinks her hope has been realized when someone shows up. Unfortunately, the someone is not a bee expert but a stranger, one moreover who is allergic to bee stings. The need to administer an epi-pen and get the stranger to medical help ASAP take precedence over Isabel’s other concerns.

Cormac O'Neill is a man accustomed to danger. He just didn’t expect to encounter it on a peaceful farm. An award-winning investigative journalist who has covered stories in some of the world’s most volatile spots, Mac, sidelined temporarily with a knee injury, has agreed to write the story of Magnus Johansen, Isabel’s Grandfather and a hero of the Danish Resistance. Mac expects to remain at the farm just long enough to gather the information he needs from Magnus, but he falls under the spell of the lovely Isabel, the food she prepares, and e beauty and serenity of Bella Vista.

As Magnus tells Mac the story of the Johansen family in Denmark, of the disappearance of Magnus’s parents, of Magnus’s activities with the resistance during World War II, and of Eva, Isabel’s grandmother, and their immigration to America, Isabel and Tess discover family secrets that have been protected for decades. But even as Magnus reveals these long-held secrets, Isabel and Mac work to keep their secrets buried.

The simmering awareness that exists between Isabel and Mac deepens into a relationship that changes both of them. Mac reawakens Isabel’s sense of adventure and spirit of fun, and Isabel has the nomadic Mac considering what it would be like to see all four seasons in one place. But is even love enough to make possible a happily ever after between a man who never stays and a woman who cannot bear to leave her home.

The second novel in Wiggs’s Bella Vista series offers the same strong sense of place that characterized the first book. The scenes and the scents and the textures of life at Bella Vista give the reader the sense of having visited this idyllic spot. Both Isabel and Mac are likeable characters, and watching them fall in love is a delight. They have enough in common to enable the reader to believe that more than their desire for one another unites them, and yet the difference between Mac, a diplomat’s son who has spent his entire life wandering the globe, and Isabel, whose heart and memories are inextricably entangled with Bella Vista, is great enough to cast doubt on a happy resolution.

Magnus’s story is compelling and poignant on many levels, and it contributes to the richly developed theme of the intrusion of the past on the present. Readers who enjoyed The Apple Orchard will be happy to see more of Tess and Dominic. Some threads are resolved, and others are left tantalizingly unresolved. One particular twist Wiggs tosses in left me beyond eager for the next Bella Vista book.


Sometimes a book that leaves me wondering what now irritates me. Sometimes it fascinates me and makes me impatient for the next book. How do you feel about loose threads and cliffhanger endings?