No River Too Wide 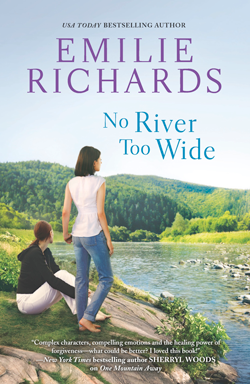 Janine Stoddard has spent twenty-five years as the wife of an abusive husband, but there is still enough spirit left in her to seize the opportunity to escape when she is offered help by Moving On, an underground highway for abused women. One night when her husband is away, she puts her carefully conceived plan into effect, leaving her luxurious Topeka, Kansas, prison in flames. Janine has refused contact with her daughter because she feared her husband would somehow discover Harmony’s location, but she longs to see her daughter and the nine-month-old granddaughter she has never met before she settles somewhere to begin a new life. Thus, she heads for Asheville, North Carolina, for what she plans to be a brief stop before moving on to New Hampshire where she hopes to be safe.

Harmony has checked the Topeka Capiatal-Journal every few weeks since her mother told her never to call home again more than a year ago, expecting to see a headline reporting her mother’s death. She’s heartbroken but not surprised when she thinks her mother has perished in the fire, but surprised is an understatement of her feelings when her mother shows up on the farm outside Asheville where Harmony works as a Jill-of-all-trades and lives in a garage apartment. Harmony’s friend Taylor Martin sees offering Jan a home as a way of repaying Harmony for all that Harmony did for Taylor’s mother. With Taylor living twenty miles away on the other side of Asheville, Jan will be away from Harmony but close enough for the Jan to see her daughter and granddaughter occasionally. When Taylor tells Jan that her being with Taylor’s eleven-year-old daughter when Taylor has to be away on school nights will be a help, Jan agrees to stay.

Richards deftly weaves together the stories of these three women and adds the mystery of Rex’s Stoddard’s disappearance to complicate things. Despite the insurance fraud thread and a romance between the cautious Taylor and Adam Pryor, a new man in town with secrets of his own, No River Too Wide is a story about growth and forgiveness, including self-forgiveness, which may be more difficult than forgiving others.

Emilie Richards is one of the writers whose books I began reading in the 1980s and have followed her from category fiction to single-title contemporary romance to mystery to women’s fiction and enjoyed each phase of the journey. No River Too Wide, the third book in her Goddesses Anonymous series, has the emotionally rich contexts and layered characters that have kept me reading this author for nearly three decades. Whether she is writing about troubled marriages, complex family dynamics, the tendrils of the past that cling to human lives, or any one of a dozen or more social issues that touch the lives of her characters--and her readers--Emilie Richards is one of the best writers in popular fiction.

Books about battered women have become common in recent years, but few show as full a portrait of a woman abused over decades as Richards offers in this book. Alternately heart-rending and inspiring, No River Too Wide reveals a woman almost destroyed by physical and psychological abuse who has the courage to accept help, one who gradually forgives herself, regains her self-respect, and acquires a new appreciation of the freedom to make choices and to grow into an independent woman.


Although Harmony was a lesser target of her father’s abuse than was her mother and, with her mother’s help, she escaped as soon as she graduated from high school, she bears her own scars. She loves her mother, but she also blames her for not leaving sooner. She is also suspicious of lives that seem too perfect from the outside, having experienced the horror that could be concealed behind the happy family image.

Taylor learned some painful lessons through her estrangement and reconciliation with her mother (One Mountain Away). She explains to her daughter Maddie:

“Here’s what you need to learn from everything that happened with Mom and me. We loved each other but we let our differences get in the way. I held a grudge for years, almost to the end of her life, and I was wrong to do that. Very wrong.”

But Taylor’s learning is incomplete; she still finds it difficult to forgive when people fall short of her expectations.


One of the joys of reading this book is seeing the growth that takes place in many characters from the three women who are primary to baby Lottie’s father. For readers who like a romance line even in their women’s fiction, there is Taylor’s relationship with Adam, a man who wants to do the right thing but finds it difficult to reconcile his professional responsibilities with the dictates of his conscience. I also liked Harmony’s reentry to the world of dating and her admission that Mr. Perfect may also be Mr. Not Right for me.

I’m sure it is clear by now that I loved No River Too Wide. It’s another Richards keeper for me, and I highly recommend it. I do feel I should add one caveat: this book can be read as a standalone, but readers who have not read One Mountain Away may feel as if Harmony and Taylor’s stories are incomplete. Reading the two books makes for a richer, more meaningful reading experience. The second book, Somewhere Between Luck and Trust, is also excellent, but it is more loosely connected.


Do you have a keeper shelf? What’s your most recent addition to it?

I do have a keeper shelf although since many of the books on it are on my e reader it is conceptual. Vixen In Velvet and The Suffragette Scandal are the most recent additions; before tbem there hasn't been one for a few months.

Deb, I even have Keepers organized by subgenre on my Kindle, the closest I could get to a virtual shelf. :)