An HQN Trio: Novels from Mallery, Morgan, and Ridgway 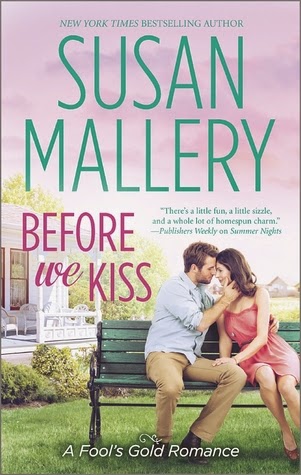 Before We Kiss
By Susan Mallery
Publisher: Harlequin HQN
Release Date: May 27, 2014

Since a history of bad luck with women had him taking a hiatus from romantic entanglements, Sam Ridge planned on spending the evening of Valentine’s Day alone. His plan changed when he saw Dellina Hopkins smile. They spent one incredible night together, but the sight that greeted Sam when he opened the door of a spare bedroom in error sent him fleeing into the night. A room full of wedding gowns and a dry-erase board list headed “Ten Ways to Get Him to Propose” terrified him so much that he spent the next five months avoiding Dellina. Unfortunately, she’s the only party planner in Fool’s Gold, and Sam needs her help to organize a three-day party his PR firm Score is hosting for clients. Awkward doesn’t even begin to describe Sam’s situation.

Dellina Hopkins is not a one-night stand kind of girl, but former football star Sam Ridge was hot enough to cause her to make an exception. The time they share is the stuff of fantasy, but Dellina is less impressed by Sam’s hasty departure. She knows she shouldn’t enjoy his discomfort so much when, after months of silence, he has to seek her out to request she plan the Score party, but she does. She anticipates how foolish he’s going to feel when he learns that the wedding gowns belong in Paper Moon Wedding Gowns, Isabel Beebee’s shop, and the list to Dellina's sister Fayrene. But Sam’s discomfiture is all she can enjoy. It doesn’t matter how strong their chemistry is, Dellina doesn’t get involved with her clients.

Mallery gives her readers another emotionally satisfying story in this tale of two people who are more interested in right now than in forever until their hearts persuade them differently. This is a novel filled with humor (Sam’s irrepressible mother and her inability to accept boundaries is a hoot) plus ample sizzle and the warmth and interconnections that are characteristic of Fool’s Gold. Thumbs up to another winner from Mallery. 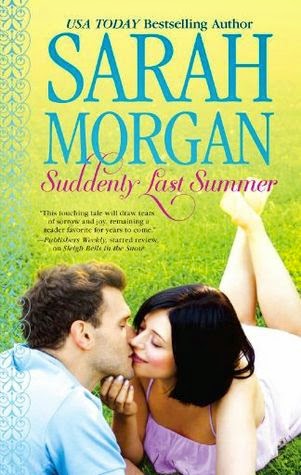 Sean O’Neil loves his family, but he prefers to limit his contact with them. His life is centered not at Snow Crystal Resort, the family business in Vermont, but in his orthopedic surgery practice in Boston. That changes when Walter O’Neil, grandfather to Sean and his brothers Jackson and Tyler, suffers a heart attack. Sean plans to spend a short time in Vermont, oversee his grandfather’s first days at home after his release from the hospital, and then return to Boston and life as usual, but when his help is needed to see that a new restaurant at the resorts opens on schedule, he extends his stay. Family loyalty is a factor, but if he is honest with himself, he knows that it is the resort’s passionate French chef Élise Philippe who has him building a deck and spending too much time remembering the moments he shared with her during an earlier visit.

Élise is a passionate woman. She is passionate about her job and about the O’Neils who, from family patriarch Walter to teenage Jess, have become her family, but she is doing all she can to contain her passion for Sean O’Neil. Deeply scarred by her past, Élise ferociously protects her heart from romantic entanglements. Let her staff drool over the sexy, shirtless Sean O’Neil as he builds that deck. Élise will focus her energies on ensuring that last summer’s passionate encounter remains an unforgettable but not-to-be-repeated experience. But when the two are constantly in one another’s company, an emotional intimacy develops that intensifies the physical attraction that is stronger than all their determination to avoid long-term commitment.

If you are a fan of contemporary romance and have not read Sarah Morgan, do yourself a favor and rush to your favorite bookseller to find this book. Nobody is better at creating characters so real they seem like friends engaged in relationships that, while high on sizzle, still develop in a credible fashion. Sleigh Bells in the Snow was one of my favorite contemporaries of 2013, and Suddenly Last Summer is just as good. I’ve already read Tyler’s book, Maybe This Christmas (an October 29 release) and loved it. I give this series my highest recommendation. 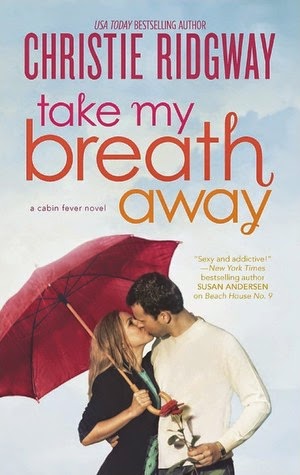 Take My Breath Away
By Christie Ridgway
Publisher: Harlequin HQN
Release Date: May 27

Poppy Walker is one stubborn woman. Her siblings may be convinced that a family curse prevents them from doing anything with a dozen run-down cabins that the Walkers own, but Poppy is determined that her vision and sweat equity will be enough to transform the cabins into a revenue-producing enterprise that will help support her and her five-year-old son Mason. The two weeks that her son is on a visit to Disneyland seems the perfect opportunity to make a dent in the required renovations. Poppy hopes to have the cabins ready for summer rental, but when a clearly wealthy flatlander shows up wanting to rent a cabin and offering quintuple the going rate, Poppy can’t say no, even when all her instincts tell her that this stranger with the electric-blue eyes is dangerous.

Ever since the tragedy that devastated his family four years ago, former teen idol and current movie executive Ryan Hamilton has found the month of March torturous. All he wants is a sanctuary where he can hide from the world—particularly the celebrity-stalking press--and prevent himself from doing something crazily destructive for the next few weeks. The secluded cabin in the mountains of Southern California seems perfect for his purpose. Now he just needs to control his interest in Poppy whose natural beauty and total ignorance of who he is make her difficult to ignore.

Christie Ridgway combines sweet and sexy in this first book in her Cabin Fever series. Poppy and Ryan are opposites in every way. She is a sunny optimist with deep roots in her small community; he is a haunted man whose fame and wealth do little to help him escape his demons. But circumstances throw them together. Although each has reasons to avoid relationships, neither can deny the attraction that blazes between them. A secondary romance between Ryan’s brother Linus and Poppy’s cousin Charlotte (Charlie) adds interest. Although there’s nothing extraordinary about this book and some readers may find a kidnapping thread a bit over-the-top, Ridgway fans and other readers who like their romances heavy on charm and heart-tugs will enjoy this book and look forward to the next book about the Walker siblings.


All these books are part of a series, a description that applies to most of the books I read. I’m a series addict. Do you share my addiction, or would you like to see fewer series and more single books?


Note: Since I am late posting these reviews, I am moving the final post at Just Janga to tomorrow, Friday, August 1.