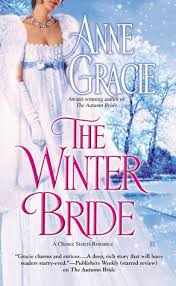 Freddy Monkton-Coombes reluctantly agrees to his friend Max’s request that Freddy keep an eye on Max’s aunt Lady Beatrice Davenham and her charges Jane, Damaris, and Daisy Chance while Max and his bride, Abby Chance, are on their wedding trip. Despite Max’s assurances that the task will not be onerous, Freddy is not surprised that his new responsibilities take up more and more of his time. First, there are the literary afternoons where the subject of the readings always seems to be some unfortunate fellow being pushed or charmed into marriage, a state Freddy is dedicated to avoiding.  Then there is Damaris Chance’s insistence on leaving Lady Bea’s home at the crack of dawn and journeying to an unsafe part of town to paint china. Of course, Freddy has to accompany her to assure himself of her safety, a practice that makes him and his valet most unhappy.

Damaris knows Mr. Monkton-Coombes disapproves of her work, but she cannot let his disapproval weigh with her. Her affection for Lady Bea is strong enough to persuade her to go along with the lady’s plan to give her unmarried “nieces” a season in which to enjoy pretty clothes, dancing, and suitors, but Damaris knows that the goal of the season is to find a husband
--and Damaris has no need of a husband since she is unalterably opposed to marriage for herself. Instead, she dreams of earning enough money to buy a cottage in the country where she will be safe and independent.

When Freddy learns that his mother has planned a house party to coincide with his annual visit to his parents’ home and invited a host of eligible young women, many of whom are relentless and audacious in their pursuit of Freddy, he decides he needs a fake fiancée. Since Damaris has made her aversion to marriage clear to him, she is the perfect candidate.  Damaris thinks Freddy’s idea is mad, but when he offers her an irresistible deal, she agrees to play the role and to accompany Freddy on his visit.

Neither Freddy nor Damaris is what he/she seems to be. Both have come through darkness—scarred but refusing to surrender to the pain. As they come to know one another better, a genuine liking and friendship develops. By the time they realize that friendship has ripened into love, each considers marriage to the other to be a consummation devoutly to be wished. But there are still obstacles to overcome before they can begin their HEA.

Damaris is the kind of heroine who deserves to be termed “strong.” She has suffered devastating loss and has had the courage to survive events that would have destroyed a weaker person. That she has done so without becoming bitter or vengeful makes her all the more remarkable. Familiar with The Autumn Bride, the first book in the Chance Sisters series, I was aware that Damaris had secrets that she did not share even with those she loves, but I wasn’t expecting her past to hold so many levels of suffering. She deserves an accepting, tender, protective hero, and Freddy is all of these.

While Freddy’s class and gender made him less vulnerable physically when those who should have offered him compassion, understanding, and love failed to do so, he was no less vulnerable emotionally. Like Damaris, he keeps his past to himself, and even those who know him best and realize some of what he has accomplished accept him essentially as the light-hearted rake he appears to be. I confess that I was already a little in love with Freddy because he reminded me a bit of Georgette Heyer’s  Freddy Standen, a hero I adore, but Gracie’s Freddy is a more complex character and the very best kind of beta hero, a man who combines strength and honor with kindness and a nurturing nature.

In addition to an engaging hero and heroine, Gracie gives her readers a cast of appealing secondary characters. Lady Bea is as endearing and benevolently manipulative as she was in the first book. Max and Abby have roles to play in this story, and she shows enough of Jane and Daisy to leave readers eager for The Spring Bride and The Summer Bride.

Anne Gracie is among a very select group of authors whose books never fail to move me to tears, to laughter, and to blissful sighs of readerly satisfaction. The Winter Bride joins a long list of Gracie keepers on my bookshelves. I highly recommend it.


Anne Gracie has been on my auto-buy list since I read Gallant Waif in 2001—and immediately ordered her first book Tallie’s Knight, both of which I still reread. Do you have an auto-buy list? Have you added authors based on the first book you read by them?

Yes I have a lengthy autobuy list. Usually I have to read several before I put an author on the list but Joanna Bourne, Meredith Duran and Isabelle Cooper went on with the first book I read. They tend to be new authors only because with authors who have been around for a while first I go through the backlist. And sometimes I put someone like Thea Harrison on and then realize that I only want to autobuy one of her series.

Anne Gracie is on my auto-buy list too, along with a good number of historical romance authors. :)

I do have an auto buy list. I'm not too sure I've made that decision on the first book I've read by them, though. I'm usually more cautious. I remember getting a book by Susan Elizabeth Phillips and after reading it knowing I wanted to read everything she wrote. The same with Sarah Mayberry.

I do have an auto buy list. I'm not too sure I've made that decision on the first book I've read by them, though. I'm usually more cautious. I remember getting a book by Susan Elizabeth Phillips and after reading it knowing I wanted to read everything she wrote. The same with Sarah Mayberry.

Mary Jo Putney recently interviewed Anne Gracie and commented that she preferred male centred series rather than female centred because of the action and adventure that flows more naturally. I agreed with this view and asked Anne if one of her novels would be good to start on, with outdoor adventure mixed with romance. Her reply:

Quantum, I've written a few you might call adventurous - mostly overseas settings/road trip kind of stories. Try Bride By Mistake, or Bride By Mistake.
But The Autumn Bride also contains some adventurous moments, in this case the heroine being bold and brave, so you could try that.

I think I will try 'Bride by Mistake' and if I like that I will move on to 'The Autumn Bride' which is the first in this series. I might eventually get to 'The Winter Bride' if Gracie becomes an auto-buy. LOL

I actually have a 'Favourite Author' list for which the audio books are auto buys. The list includes Mary Jo Putney, Catherine Anderson, Mary Balogh and Jojo Moyes... though I'm now starting to add Romantic suspense authors to the list.

Deb, I also added Bourne and Duran to my list on the strength of their first books. It was actually Bourne's second, but I didn't know that at the time. I love the feeling of discovering a new author whose book I love enough to add its author to that list.

Thanks, Mary. I loved those pigs too. I probably have more historical authors on my list, but I also have a good many contemporary romance authors along with some mystery and women's fiction and a sprinkling of RS and fantasy.

Irish, I definitely added SEP with the first book of hers I read, but it wasn't her first book. Same with Mayberry. I'm not sure that I would have made either an autobuy though had the first book been the one I read first.

Q, MJP and Balogh are among my top favorites too. I have a special affection for them because I have been reading them without missing a book for more than two decades. I started with Balogh with her first book and with MJP with her second.