Tuesday Review: Between the Devil and Ian Eversea 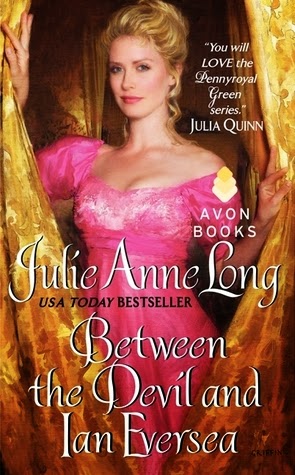 Between the Devil and Ian Eversea

With her brother killed in the War of 1812 and her parents killed in a carriage accident, Titania “Tansy” Danforth has journeyed from New York, where she has lived from the age of eight, to England, the land of her birth, where she is prepared to marry a titled gentleman to whom her cousin and guardian, the Duke of Falconbridge will introduce her. Possessing wealth and a beauty that leaves men stunned, Tansy seems to be the perfect candidate for an impressive marriage, a future that she herself anticipates since she is eager to have her own home. She has a list of qualities she’d like in a husband, and she shares it with her guardian. The Duke of Falconbridge is confident that his ward will have many suitors, but he is determined that Ian Eversea, his only unmarried brother-in-law, not be among them.

Ian is preparing to leave Pennyroyal Green, not for a jaunt to London but for an extended journey in the style of Miles Redmond to China, India, Africa, and Brazil. In the meantime, he occupies himself in the beds of women who understand that his staying power is limited to his sexual performance and not to any pledges of lasting affection. He has no interest in innocent misses, although he is highly incensed that Falconbridge finds it necessary to warn him away from his American ward.

Despite the joint efforts of all the Everseas but one to prevent it, Tansy eventually encounters Ian. Even before she knows his name, she is aware of him in a startlingly self-conscious way. When she actually meets him, her response is more overwhelming: “All the things she felt in his presence felt too large to contain, too new to name. And it was this, perhaps, she’d been waiting for her entire life.” Ian is less impressed. He admits Tansy is “very pretty,” but he writes her off as “vapid” and an “awkward ingénue.”  The two will spend considerable time in barbed conversations, with distrust on Ian’s part and a combination of fascination and dislike on Tansy’s, but as they slowly reveal the real person beneath the roles they have assumed, their feelings for one another deepen. Falconbridge’s opposition may be one barrier to a relationship between the two, but a greater one is Ian’s plan to become a world traveler while Tansy dreams of a home.

The attraction of opposites is a favorite trope in romance fiction, and one Long has used to wonderful effect in earlier books in the Pennyroyal Green series, but, despite appearances, the virginal Tansy Danforth and the roguish Ian Eversea are more alike than they are different. They have both been confronted with devastating loss that affects their approach to life thereafter (Tansy with the deaths of her family and Ian with his war experience). They are both accomplished at playing the role they have adopted to protect their vulnerabilities. Both are perceived as rather one-dimensional characters by those around them. Tansy is written off as an accomplished but basically harmless flirt, and even Ian’s siblings who love him accept the “climbing” episode that made Falconbridge Ian’s enemy as essentially definitive. Ian and Tansy’s gradual realization of their commonalities was one of my favorite parts of the book.

This book is also the richest in humor among the nine books in the series. Tansy’s effect on the males of Pennyroyal Green is fun. The marksmanship contest particularly includes some laugh-out-loud moments and delights on several levels. The never openly acknowledged bouquet competition between Tansy and Olivia also evokes its share of smiles. But I think my favorite funny scenes are those between Tansy and Falconbridge in which the humor is more subtle and clearly character-based.

I also liked seeing the other Everseas. The reader catches glimpses of most of the family, but Genevieve and Falconbridge have prominent roles in the story. Since they are my favorite couple in the series, I was pleased to see their happiness in progress. The serene and saintly Olivia becomes more human in this novel as her serenity is ruffled and some less than saintly emotions are revealed. Olivia’s suitor, Lord Landsdowne, becomes an appealing character with hero potential rather than merely a name. These last two elements, of course, left me anticipating other story lines.

Like most fans of the series, I am eager to see Olivia and Lyon Redmond’s story and will be heartbroken if they don’t get their HEA. I am also impatient to know the secrets of the older Everseas and Redmonds. But I enjoy each trip I make to Pennyroyal Green, and this one was no exception. I turned the last page sighing over Tansy and Ian’s HEA and wondering how long I have to wait to return to the world of the Everseas and Redmonds. After nine books, the Pennyroyal Green series continues to be one of my all-time favorite series, a testament to the talent and ingenuity of Julie Anne Long.

I think it is really tricky to keep readers’ invested in a story even as resolution is delayed over the course of many books. I’m awed by JAL’s ability to do this with Olivia and Lyon’s story. Are you a Pennyroyal Green fan? What other story lines have kept you engaged over a lengthy series?

You said it so much better than me! (My review will be coming soon as well.) But yes, the things you loved, I loved--I think it's why I talk about Falconbridge so much in my review because while he doesn't overpower the story, he is quite significant in the story and I love reading the bits with him in it. Especially his sense of humor, which Tansy is in doubt of. *LOL* So so good. And yes, I too will be heartbroken if there is no Lyon and Olivia, though her new beau is very promising.

Cannot wait for this one...and glad it visits with other characters from past books...And the levity...I can get into that too

Excited to see this one on my e reader

I'll look forward to reading your review, Hellie. Our styles are different, but we both communicate our joy in the books we love. I don't think it's a matter of who "says it better," although I appreciate your kind words.

I'm almost as eager to get the full story of Colin Eversea's parentage and the relationships of the older generation as I am for Olivia and Lyon's story. :)

It's a great read, Hope. But I think that describes every JAL book I've read, and I started reading her books with her debut novel.

This is one of my all-time favorite series. I'm usually starting to lose interest after nine books but JAL keeps reeling me back in with each book that is released. Like the rest of you, I'm salivating at the thought of Olivia and Lyon's book. They better get a book!

PJ, I think you have lots of company in your eagerness for Lyon and Olivia's story. Almost every time the Pennyroyal Green series is mentioned, this topic is part of the discussion. I'm already planning to reread the full series just before the release of that much anticipated book.