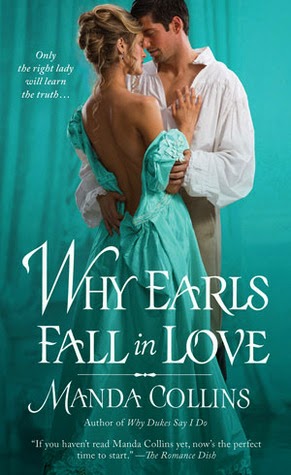 The second book in Manda Collins’s Wicked Widows trilogy continues the mystery of the threats Isabella, the current Duchess of Ormond; Perdita, the young dowager Duchess of Ormond, and Georgina Mowbray are receiving concerning their roles in the death of the abusive Duke of Ormond.  In the first book, Why Dukes Say I Do, Isabella is the target of the self-appointed avenger’s death. In the second book, his--or her--attention turns to Georgina.

Georgina Mowbray is finding her new position as companion to the aging but lively Lady Russell surprisingly pleasant until Lady Russell summons her extended family to Bath to celebrate her seventieth birthday. Among the relatives who gather is Lady Russell’s favorite nephew, Dominic, Earl of Coniston, familiarly known as Con. Georgina met Con when he was betrothed to her friend Perdita, then the widowed Duchess of Ormond, and despite his obvious charm and good looks, she didn’t think highly of him. He reminded her too much of the spoiled young officers she knew as a military wife. Her opinion of him has not changed.

Con is skilled at reading people’s reactions, and he knows full well that Georgina is unimpressed with him. He confronts her directly, asking if he has done something to offend her. His openness is the first thing that has Georgina questioning her own conclusions about him. For his part, everything Con learns about Georgina just intensifies his attraction to her. Her understated beauty, her independence, and her essential goodness are all part of her growing appeal for him. When he realizes that Georgie is in danger, he is determined to use all his resources to protect her and to find the mysterious man who is tormenting her.

Georgie’s experience with her late husband makes her reluctant to trust any man. Even after she recognizes that Con is very different from the brute she married, she is slow to take him completely into her confidence. Gradually he wins her trust and her love, but she remains troubled by the social gulf that exists between the daughter of one army officer and the wife of another and a wealthy earl. Can Con both defeat an unknown enemy and overcome Georgie’s reservations to win the woman who has won his heart and his respect?

Collins, who promises her readers “romance spiced with mystery,” has upped the stakes and the tension of the mystery element in Why Earls Fall in Love, and she manages to do so without sacrificing the centrality of the romance. In Georgina and Con, Collins creates likeable protagonists whose choices preserve the integrity of their characters. Georgina grew up with her father away with his military duties much of the time, a pattern that was repeated with her husband. She is accustomed to making decisions unaided, to taking action when necessary, and to taking care of herself. This is the character the reader encounters the evening of the duke’s death, and her character remains consistent through both novels. Even as she takes comfort in Con’s care for her, she insists on her autonomy.  I can’t say much about the denouement without including spoilers, so I’ll just say that I was elated that Georgie stayed true to herself all the way.

Con is a charmer, not in the pejorative sense of a shallow person who uses his personal attractiveness to use and manipulate people but in the sense of a person blessed with qualities that effortlessly win the liking and admiration of others. His charm plus his wealth and social position have made him a man conditioned to being in control. Because he is a man of compassion and honesty, his control is benevolent. But it is not easy for him to accept Georgie’s right to make decisions even when he feels they endanger her. The tension that exists between his belief that he knows best and his respect for Georgie as an independent spirit not only made him more real to me but also allowed me to believe fully in his declaration of love for a woman very different from him in social status and in personality.

Sometimes suspending disbelief for the course of a novel is more than I can do, but I found it easy to enter fully into the world of this book. I believed in Georgie and Con as individuals, and I believed in them as a couple who could build a happy life together. I also believed that the threat to Georgie was real, and the killer’s identity caught me by surprise. So did the number of victims.

I loved the big things about this book—characters in whom I was invested, a plot that kept me turning pages (and buying into the red herrings), historical accuracy in setting, action, and the role of women, and an authorial voice in which I delighted. I also loved the little things—Con’s bad art, the nod to the Ugly Ducklings from Collins’s first series, and the affection and loyalty between Georgie and Perdita, and Isabella.  I’ve been falling in love with Manda Collins’s stories since before she was published, and I think this one may be her best yet. I highly recommend it.

Do you like your historical romance mixed with mystery?  How do you feel about mystery threads that run through several books?

This book has all the ingredients that I like and I especially like a thread meandering through a series, be it mystery, members of a group (Like in Putney's fallen Angels series) or anything really.

Unfortunately I don't think the publisher is doing Manda any favors with the pricing:

Surely the e-book should have a bigger discount than this. It's also quite common, and good marketing practice, to mark down the first book in a series in order to 'capture' readers who may be hovering.

When I can buy an e-book of Lisa Kleypas's 'Secrets of a Summer Night' (first of the series) for £1.99, it does seem that 'The Wicked Widows' are rather pricey!

Great review as always Janga
My fingers are now itching to spend the money! LOL

I don't mind a little mystery with my romance but I like the main spotlight on the romance. More and more these days I wait for a whole series to come out before I start it, but this review is making me re-think that course. Sounds like a good one. I love stories with female friendships also so this series sounds like it's got all the right ingredients for me.

Thanks for the review, Janga.

I adored the first one but became more and more invested in this one...I mean these books are written so well. I think this may be her best yet...Kudos to Collins.
I am impressed with the plots (nothing boring here) her characters are so good , even all the ones around the H and h.

I am so looking forward to the next but I will tell you that this and yes, even the first one is going to get a re read from me this week!

Q, I too think ebooks should be less expensive than print. I recently decided not to buy one title on my list because the print version was cheaper than the ebook. But I think this one is worth the price. Kleypas's Wallflower books are several years old while WDEFIL is a new release. It's rare to find new releases from big publishers at bargain prices. I really think you will like Manda's new series.

Irish, I was really impressed with Manda's skill in maintaining the mystery without losing the focus on the relationship between the H/H. One reason I read so little romantic suspense these days is that often the focus is on the suspense, and the H/H's relationship seems to consist only of some steamy scenes. But Manda keeps the balance. I hope you check out the series.

Hope, I share your enthusiasm and your opinion that WEFIL is Manda's best. And I too am eager for Perdita's story.