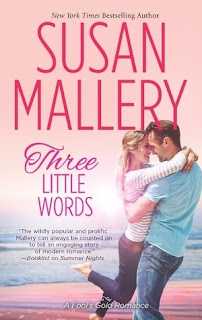 Isabel Beebe has returned temporarily to her hometown of Fool’s Gold, California. She has two goals for her stay: (1) to manage Paper Moon Wedding Gowns, the family business begun by her grandmother, while her parents are on a world tour and update it for them to sell upon her return; (2) to avoid contact with Ford Hendrix. She’s making progress toward the first goal, but the second one became impossible since she’s just learned that her parents rented their garage apartment to Ford. Since Isabel is living in her parents’ house, there is no way she can continue to avoid him.

Isabel’s older sister, Maeve, was engaged to Ford, but, after cheating on him with one of his best friends, she dumped him for that friend days before she and Ford were to be married. A broken-hearted Ford joined the Navy, and Fool’s Gold has seen little of him in the fourteen years since then. Isabel, who was fourteen at the time, was in love with Ford in the way only a young teen can be in love. She wrote to him for ten years, sharing bits of her life, refusing to be discouraged at the lack of replies.  She only stopped writing when the man she later married was about to propose. When she’s being honest with herself, she admits that she will always have a special feeling for Ford.

Ford Hendrix knew the time had come for him to find something to do with his life other than continue with the Navy SEALs, so when his friend Justice Garrett proposes they join with a couple of other friends to set up a security training facility in Fool’s Gold, Ford decides he’s ready to return permanently. He’s enjoying spending time with his family, but his mother’s hovering is driving him nuts, as is her determination to see him and his brother Kent as happily married as the rest of their siblings. Ford hopes that renting an apartment will give him some space from his mother and sisters. When even that doesn’t discourage his mom, he persuades Isabel to be his faux girlfriend in order to stop his mother’s matchmaking efforts. With Isabel set to return to New York and open a shop there, Ford thinks she’s perfect for the role. He’s about to find out how perfect she truly is for him. But Ford doesn’t do forever, and it’s clear to him that whether she’s in New York or Fool’s Gold, Isabel is a forever girl.

I love these characters! Isabel is sweet and funny and confused and vulnerable, particularly after her divorce. Yet she has an essential optimism that I found endearing. Ford is a charmer with a terrific sense of humor and an understanding heart, an irresistible combination.  I cheer Mallory for giving readers a warrior hero with his own demons to fight who is neither a loner nor an alpha butting heads to show he’s in charge. The chemistry between them is great, but equally important Isabel and Ford like one another. And their history provides a strong link. Ford will always be the man in whom the younger Isabel confided, and Isabel will always be the young girl whose letters kept him sane in a dark and dangerous time. This is the foundation other feelings build on. I really like the two of them together and believe they can build a life together. The secondary romance between Consuelo and Kent is also wonderful, although their relationship is very different from Isabel and Ford’s. Consuelo and Kent are such an unexpected match, and yet they are great together. As always, part of the pleasure of a Fool’s Gold book is the town itself and visits with old friends.

My one complaint is that the hero who thinks he can’t love and must run away has been overdone.  I’m ready to see some variety in the conflict that postpones the HEA. Indications are that the next set within the series will feature the football players who are moving their business to Fool’s Gold. I’m eager to meet them and their heroines, but I hope to see the pattern of relationships mixed up a bit.

Do you think books in a long-running series can become too similar? What’s the difference between the comfortably familiar and the disturbingly repetitious for you?
Posted by Janga at 12:00 AM

It's hard to say how many books should be enough in a series.. I happen to like this one so if more were forth coming or maybe a spin off from this series might be a good thing. I think as long as a writer is keeping things interesting and fresh, then we the readers will keep up with his or her books..

Kathleen, I'll probably keep reading Fool's Gold books as long as Mallery writes them. I read all eighteen of Robyn Carr's Virgin River books plus the novellas, and they still line a keeper shelf. But I do hope for a bit more variety in the heroes' reactions. The characters themselves are very much individuals.

I love Fool's Gold, these books just keep getting better and better. I love series, it is always fun to revisit characters from previous story lines.

I really like your honesty in your review. I think that sometimes it may seem that the men that Susan rights about are the same but once you really get into the book you see that she has developed them more. I am very interested to see what the football players will be like in next years books.

As for your question on long running series I think that it depends on the author if it works. If they don't introduce characters enough then the series just gets old. Its always interesting to see how authors such as Susan and Jill Shalvis can keep the books interesting.

This is a great end to this summers trilogy. If you love Fools Gold and Susan's stories it's icing. If this is your 1st time prepare to fall in love while smiling and chuckling out loud. Have fun!

Booklover26, I agree that the bodyguard heroes are all distinct characters. It's just that one characteristic that seems to repeat itself that I find bothersome. I'm eager for the football players stories too.

Patsy, I can tell you are a major Mallery fan. I like your enthusiasm.

I liked Kent and Consuelo better

I love this series and just when I think I've read the best another one comes out and it's even better. If anybody needs a $1 coupon off a paperback For Three Little Words, just released today, let me know.
Julie

I loved Three Little Words! This summer's book have been the best yet!

Always love returning to Fool's Gold. It is like returning home!! I love starting my summer reading a new Fool's Gold book!! Just One Kiss, Two of a Kind, & Three Little Words are all great books to read.