Tuesday Review: Two of a Kind 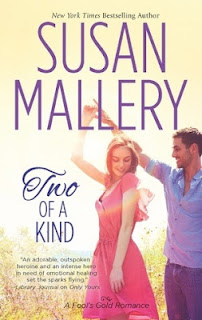 Felicia Swift has a genius I. Q., the social skills of a six-year-old, and a hunger to be “normal.”  Her extraordinary intelligence made her parents so uncomfortable that they abandoned her to be brought up by scientists and scholars. She has come to Fool’s Gold to help her friends from her days as a logistician with the Special Forces set up CDS, their bodyguard school. But even though she knows she can continue to work with them, Felicia wants a job that is closer to normal. She’s ready to become part of the Fool’s Gold community and find someone with whom she can settle down and create a home and family. The first step toward her goal may be the job she’s just been offered a job. Pia Moreno, pregnant with her fourth child, has decided it’s time to become a stay-at-home mom, and the mayor thinks Felicia will be the ideal replacement. Torn between elation at the opportunity and fear that she’ll mess up, she turns to Gideon Boylan for advice, a man she remembers too well from their single encounter four years ago.

Gideon Boylan has found his place on the fringes of the Fool’s Gold community, literally and metaphorically. He bought a house outside town, isolated on the side of a mountain, and bought a radio station where he fills the air waves with classic rock during the night hours, his low, sexy voice winning fans among the ladies while he maintains his distance. Gideon may look like other people, but marked by his years as a warrior--especially the two he spent in captivity being tortured and watching his comrades die until he was the only one who survived long enough to be rescued, he is convinced that an essential part of his humanness has been lost. He believes he lacks the capacity to love. His capacity for desire however is unabated as just the sight of a certain redhead with whom he enjoyed one unforgettable night reminds him. Four years has not been long enough to dim the memory of his time with her nor its abrupt ending when Justice Garrett and Ford Hendrix stormed in the next morning to end the idyll. What were the chances that their connection with Ford would lead them all to Fool’s Gold?

Felicia’s circle of friends is enlarging, and she loves her new job. There’s still no potential husband in sight, but when the wary Gideon accepts her proposal that he be her partner in “practice dating” to develop her social skills, life seems good. If she can only make her heart accept the fact that Gideon is adamant that he’s no candidate for a happily-ever-after relationship. When the son Gideon never knew he had shows up, Gideon may not know what to do with him, but Felicia opens her heart and accepts him as family, even though she knows she’s asking for heartbreak if Gideon can’t lose his fear of love.

Susan Mallery adds more heart-stealing characters to the Fool’s Gold community with the twelfth book in her long-running series. Gideon has suffered immeasurably, and he wins the reader’s sympathy even when she’d like to shake him for his stubborn refusal to accept the gifts that are his for the taking. Felicia is wonderful, one of my favorite characters in the series. Her impressive intelligence is minuscule compared to the size of her heart and her eagerness to embrace life. Some of the most touching scenes in the book are those she shares with her girlfriends and with Gideon’s thirteen-year-old son, Carter, who is a delight. Two of a Kind brought a tear to me eye and a smile to my face, my favorite kind of story.

As always with the Fool’s Gold books, part of the pleasure of reading is the secondary characters. The characters new in the bodyguard trilogy are an appealing group, and series fans will enjoy brief appearances by favorite characters from earlier books. Mallery shows readers a new view of Justice, who has been Felicia’s only “family” for years, and Mrs. Hendrix, so intent on seeing her two single sons married and settled in Fool’s Gold that she sets up a booth at the festival for prospective wives to complete application, is one determined mama. I especially enjoyed seeing Pia and the uncannily perspicacious Mayor Marsha.

I look forward to every trip to Fool’s Gold. I already have my ticket to return on July 30 for Three Little Words, Ford and Isabel’s story, and I hope Angel’s story is in the future.

Are you a regular visitor to Fool's Gold? Who is your favorite character?

I believe the only Fool's Gold book I've read was ALL SUMMER LONG. I loved Charlie and Clay. Susan Mallery is hit or miss for me. I've put some of her books down due to the fact that the heroes bothered me too much to read on. So I'm a little leery. This one sounds like a winner, though.

I'm a regular visitor and have this one on my TBB.

I started with 'Chasing Perfect' and was hooked by Josh and Charity. The rest is history as they say. LOL

Irish, All Summer Long is my favorite too, but I've liked most of the series,some of the others almost as much as ASL. One of the new characters reminds me of Charlie. I like the community enough to forgive the handful of jerky heroes--and some definitely qualify for that label.

Q, I'm glad you are another regular visitor to Fool's Gold. I think you'll like the new trio.

I have read all of the fools gold series and love them! I'm currently reading two of a kind and love it! If you haven't read this series your missing out. This series pulls you into the town of FG. A place I would love to live!

I've read them all plus I'm a Fool's Gold cheerleader. I named Annabelle, the librarian, in a contest Susan held so she is definitely my favorite. Close would be Denise Hendrix.

Two of a Kind is wonderful! I loved it! I think it's a great follow-up to Just One Kiss. Fool's Gold is a great place this summer more than ever...

I loved this book, TWO OF A KIND is just wonderful!!! But then I love Susan's writing.

I love the Fool's Gold series and think both Two of a Kind and Just One Kiss are the best of the bunch. I'm looking forward to Three Little Words.

Love Fool's Gold, have been reading them from the beginning. I think they just keep getting better. Loved Two of a Kind.

I love love love Felicia! She is so honest and inherently kind! It was a joy to follow her as she tried to figure our social cues and fall in love with Gideon! Susan Mallery did it again! Fantastic books! I highly recommend!!!!!!!!!

I loved Two of a Kind and cant wait for Three LIttle Words. Susan writes about a fun little town and I would very much like to be a part of that town.

I love Fool's Gold. I have read every book. My favorite is Felicia. She is so funny. In Just One Kiss, I was so curious of her, but in Two of a Kind, I knew I liked her. I knew she would be a good friend of my.