A Baker's Dozen of Reviews: Day Two--Just One Kiss 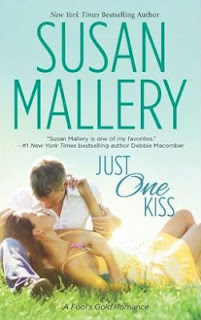 Justice Garrett was Patience McGraw’s first love, but he disappeared from Fool’s Gold with no warning before the young teens ever shared a kiss. Patience grew up and married at eighteen a man who couldn’t accept the responsibilities of fatherhood and left her less than a year later. She and her ten-year-old daughter Lillie live with Patience’s mother Ava, who suffers from MS. Patience is an optimist who enjoys her life in Fool’s Gold, dreaming of the day she can open Brew-haha, a coffee shop and occasionally regretting the man shortage in her hometown. One day Justice walks back into her life as unexpectedly as he walked out.

Memories of Fool’s Gold and Patience have been bright spots in the bleak early life of Justice Garrett. He has never forgotten Patience, and the adult version is even better than his memories. The grown-up Patience has the same vitality and straightforwardness that characterized her fourteen-year-old self and a new beauty that makes Justice dangerously aware of her. He’s hoping that his move back to Fool’s Gold will give him something he’s never had—a normal life, but he is convinced that his past makes him unfit for Patience. Life with his career criminal father, the witness protection program to prevent the father he had testified against from killing him, and a career as a military sniper have immersed his very soul in darkness that he doesn’t want touching the sweetness of Patience and her family. Can he build the security training facility that he and his friends Ford Hendrix and Angel Whittaker are planning for Fool’s Gold and keep his relationship with Patience one of friendship when he wants so much more?

Justice’s effect on Patience is just as potent as it was in the past, but Patience is more wary now. Abandoned by both her father and her husband, she knows men are always leaving. Even Justice left her, and however good his reason, he has made no effort to get in touch with her during the intervening years, not even when he reconnected with Ford, their mutual friend. Patience has to protect not only her own heart but also that of her vulnerable daughter who clearly is not immune to Justice’s charm. But Patience thinks Justice owes her the kiss she never got all those years ago, and as both she and Justice are about to discover just one kiss will never be enough.

Just One Kiss is Susan Mallery’s sixteenth trip to Fool’s Gold, California (eleven novels and five novellas), so perhaps it is not surprising that the basic plot in this one—hero driven by demons from his past too noble to commit to the heroine, whose roots run deep in the small town and who has her own reasons for wariness—is a familiar one. But Mallery’s characters are so appealing that plot similarities are a minor quibble. Patience is a delight—warm, funny, loyal, and resolute, and Justice, whose blond, blue-eyed good looks are the antithesis of his inner darkness, is not only a hunk but also a man of courage and decency, capable of more tenderness and love than he realizes.

The secondary characters, especially Lillie and Ava, add depth and interest to the story. As always, part of the fun of reading a Fool’s Gold book is the appearance of various members of the community, those whose HEAs are in process and those whose stories are yet to come. If you are a regular visitor to Fool’s Gold, you will want to be certain to buy your ticket for this year’s trips. (You can purchase them in advance.) If you’ve never been to Fool’s Gold, I highly recommend it to readers who enjoy small towns with a distinctive history and dozens of fascinating people. I never miss an opportunity to visit.

One of the things I especially enjoy about Fool’s Gold and other favorite fictional small towns is the presence of all ages from infants to nonagenerians, but it does make for a large cast of characters. Do you like books with dozens of characters, or do you belong to the camp that believes the focus in romance fiction belongs solidly on the H/H?

This is now on my (audio) wish list! For me Fools Gold is second only to Virgin River.
After the underwear modeling hero and especially Josh the cycling star, I think that Justice has a lot to live up to!

On the whole I prefer the focus to be on H/H but that may be because I like audio books. A lot of unfamiliar characters can be a strain on the memory when it's not easy to scroll back to remind oneself. Though if the plot is sufficiently gripping then I remember all the detail. LOL

I know how fond you are of Carr's Virgin River books, Q. I didn't realize you ranked Fool's Gold so high. All Summer Long is still my favorite in the series, but I really like these bodyguard heroes.

I love Fool's Gold and all the women in the story who find the right man even if it means waiting years for him to come back.

I love the Fools Gold books! I love how you feel at home there and all the Women fine the right man for them and they all are not perfect! just like real life! Cant wait for the next book!

I love this series!! Because I've read this book from the very first one, it hasn't been a challenge to keep all of the characters straight. I know some books have tons of people and they all appear or are introduced at once. In this series, it seems they're there, but they aren't always all around all the time, or they're introduced slowly in case you just picked up the current book. I do want the main focus to be on the H/H, but I also want to keep in touch with some of my favorite characters!! Can't wait for the next two bodyguards!!

Char, reunion stories are almost always winners with me too, and I agree that Susan Mallery has written some wonderful ones.

Shannon, don't you love that can't wait-for-the-next-book feeling? When a book leaves me with that feeling, I know I have a new keeper.

Angela, I just read the third bodyguard book, and all three of them are winners.

Always love returning to Fool's Gold. It is like returning home!! I love starting my summer reading a new Fool's Gold book!! I love the relationship between Patience & Justice. I love Felicia, too. She is something, but I think she would be a great friend. Always there for you no matter what & that is the type of girlfriend we all need. I love Lillie. Patience has raised a sweet little girl & she should be proud of herself.