All Summer Long: A Review 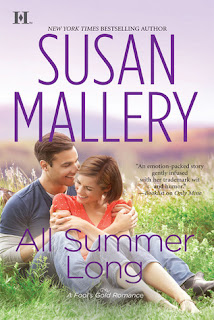 Clay Stryker, the youngest of May Stryker’s sons, like his brothers, returns to Fool’s Gold to create a home where his mother and brothers have settled. He has known a great love, but with her death, he thinks that part of his life is over. He’s made a fortune as an underwear model and a butt double in movies, but at thirty, he wants to do something different with his life. He wants to become a contributing member of the Fool’s Gold community.

His plan is to buy two hundred acres bordering the Castle Ranch on which he would grow hay and alfalfa for all the Stryker animals and organic fruits and vegetables to sell. Much of the labor would be done by Haycationers, families who pay to stay in comfortable quarters while they spend time together and rediscover a simpler way of life, living like it was the 19th century only with indoor plumbing and internet access. With a degree in business, an apprenticeship in farm management, and a business plan that even impresses Rafe the mogul, he has the credentials to make his plan a success.  He also plans to become a volunteer firefighter.

Charlie Dixon is a firefighter. She enjoys her job and knows that she’s good at it. She has friends who love her, and she’s found a place to belong in Fool’s Gold. Charlie doesn’t bother with makeup or hairstyles or dresses. She has little confidence in herself as a woman. She grew up feeling gangly and graceless, the antithesis of her beautiful, delicate mother, a world famous ballerina who has never hesitated to let Charlie know that she fails in every way to be the daughter her mother wanted. Charlie’s sense of inadequacy as a female was strengthened by an incident with a date when she was in college, an incident that changed her in significant ways. She has never thought she wanted children, but she’s changing her mind. But first she has a problem to solve, and Clay Stryker may be just the problem solver she needs
.
I loved this book! It’s my favorite in the series. Both Clay and Charlie are wonderful characters, richly drawn with layers of complexity and genuine likeability. Tomboy Charlie has been an appealing character since she was introduced in the 2011 FG trilogy. She became more appealing as she played a larger secondary role in Summer Days and Summer Nights, and she is a terrific heroine of her own story. She’s smart, delightfully sarcastic, and fiercely loyal to her friends, and in All Summer Long, the reader discovers all these vulnerabilities that make her even more special.

Clay, of course, is fantastic looking, but he’s much more than just a hot hunk. He’s strong, intelligent, and gentle with a great sense of humor, unexpected sensitivity, and genuine niceness. The latter is a quality that is sometimes underrated. His feelings about his dead wife and his past conflict with Rafe give him depth, but it is his understanding of what it means to be judged by appearance that makes him an unusual hero. Romance fiction is filled with beautiful heroines who are objectified and written off as lacking value beyond their beauty; it is much rarer to find a hero in this role.

Even Charlie at first judges him by his looks. When Clay tells her that he wants to volunteer as a firefighter, she dismisses him: “The pose was powerful, his body well defined. He looked like a model in a shoot. Probably not a stretch for him. He’d spent the past decade looking good. No doubt his idea of a hard day was having to get a spray-on tan and a haircut. Pretty, but useless, she thought.”

Once Charlie moves past this unfair assessment and begins to know Clay, the two are great together. Their love scenes may be the best that Susan Mallery has ever written. They are not just steamy scenes; they are also scenes that reveal truths about these lovers and the relationship that is developing between them—the best kind of love scene.

Charlie’s relationship with her mother adds another interesting layer to the story. It is easy to dismiss Dominique as a cold, cruel, self-absorbed bitch who doesn’t deserve the name of mother. Some of her actions approach the unforgivable, and the resolution may be a bit simplistic. But Mallery makes us understand something of why she has been the person she has been, and when Charlie needs her at the end, she comes through beautifully.

And speaking of endings, this one is guaranteed to bring a joyful sigh to romantic readers. If you’ve never read Susan Mallery, start with this book. It is Mallery at her finest. I highly recommend it.  As for me, I loved my visits to Fool’s Gold, even if not all of them were perfect. I’m already eager to return again for the story of Evangeline, the sister of Rafe, Shane, and Clay Stryker.

Mallery takes readers to Fool's Gold four times this summer. These four stories offer readers a doctor, a business mogul, a cowboy, and a model as heroes. One study revealed that doctors were the most popular heroes of contemporary romance with cowboys in second place. I can think of many mogul heroes, but Clay is the first underwear model I remember. Do you think the professions of heroes matter? Do you have favorites?

I've read the first three books in the series and was impressed. #9 sounds brilliant and as you rate it so highly Janga, I'm certainly adding it to my TBB list.

I noticed that #7 is now available (UK) as an audio book. Perfect for me.

I'm not too keen on an underwear model as hero, I prefer the heroine in that role.
And for preference I like an outdoor type as hero.

Swapping the careers of Charlie and Clay would have been perfect for me. LOL

Clay however, clearly has other ambitions and if Charlie can help him create that arable farm then everything is set for my perfect HEA. LOL

I do think this one is best of series, Q. And I don't think it would have been nearly as good had Mallery not made good use of the double role reversal. And I promise underwear model or not, Clay is a wonderful hero, one whom I think male and female readers will find likeable.

I love Summer Nights! It is very easy to get sucked into Fool's Gold. I love all of Susan's books this summer and all are great beach reads. Shane and Annabelle are wonderful, complex characters you want to keep reading more and more of with supporting characters that spark your interest. Summer Nights certainly delivers! You won’t be disappointed. Wonderful to see others enjoy her work too.

This is very nice to hear, Janga! Thank you for taking the time to write such a thoughtful review. We've posted a blurb and a link to your website on my Reviews page. I'm so glad you loved ALL SUMMER LONG!

This story is the one I'm most excited to read this year. As far as heroes, I love the cowboys but also the hunky nerds. I also like the take charge alpha men who get knocked to their knees by women who they wouldn't normally be attracted to.

Shannon, I can see that you are a major fan and that you are enthusiastic about Summer Nights. I'm a Fool's Gold fan too. I never miss a book. But I think even in a good series, All Summer Ling is a standout. :)

Thanks for stopping by, Susan, and for the link to my review. I did love All Summer Long. Clay and Charlie are wonderful individually and together.

Bookies, you seem to love variety in your romance heroes. LOL I do too, but I have a special affection for betas.

I think you'll find that All Summer Long is well-worth waiting for.

Great review. The Fools Gold series is one of my favorites and I absolutely love when an author does a continuing series. It's always nice to see glimpses of characters you read in the past pop up in future stories.

I love Fool's Gold! I love how All Summer Long starts out! I can not wait to finish this book. Summer Nights was a great book & I know this book will, too!