Keeping On: Lessons from Madeleine L’Engle 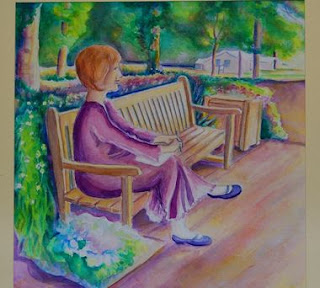 Over the past month or so, I have been reading three volumes of Madeleine L’Engle’s Crosswicks Journals: A Circle of Quiet (1971), The Summer of the Great-Grandmother (1974), and The Irrational Season (1976). At the heart of these books, which are sort of but not exactly memoirs, is Crosswicks, the pre-Revolutionary War house in Goshen, Connecticut, that L’Engle and her husband, actor Hugh Franklin, owned. The journals are about L’Engle’s life at Crosswicks with her family, but they are also about other pieces of her life—as a writer, as a Christian who struggles with her faith, as a human creature caught up in the experience of being. I’ve read the Crosswicks Journals several times at different stages in my life, and each reading has been different because I was different. Have you ever read a book and known that it was exactly the right book for you to read at the particular moment? I felt that way with this rereading of these books. It was the words about L’Engle the writer that spoke to me with the greatest urgency this time.

In A Circle of Quiet, she writes of her 40th birthday, a day on which she receives another in a series of rejections. Because it is the most recent of many and because it arrives on a turning-point birthday, L’Engle is devastated. She concludes that the rejection is a sign that she should abandon her writing and devote herself fully to domestic responsibilities. She covers her typewriter as a gesture of finality, but even as she weeps over her farewell to her writing life, a novel about failure begins to gestate.

She writes: “I uncovered the typewriter. In my journal I recorded this moment of decision, for that’s what it was. I had to write. I had no choice in the matter. It was not up to me to say I would stop, because I could not. It didn’t matter how small or inadequate my talent. If I never had another book published, and it was very clear to me that this was a real possibility, I still had to go on writing.”

I needed the reminder that a writer is defined by writing, not by publication. L’Engle reached this conclusion about writing in 1958. In 1960, she completed A Wrinkle in Time, a book with an awkward, irritable heroine and her five-year-old bother, a genius whose difference lead people to believe he is “slow.” A Wrinkle in Time was rejected twenty-six times before it finally found a publisher. L’Engle was told that the book was good but too difficult and too different to find an audience. She writes, “What matters is the book itself. If it is as good a book as you can write at this moment in time, that is what counts. Success is pleasant; of course you want it; but it isn’t what makes you write.”

L’Engle found success. A Wrinkle in Time won the Newberry Medal in 1963 and became one of the best loved children’s books of all time. (On a side note, it plays an important role in the 2010 Newberry Award winner, When You Reach Me by Rebecca Stead.) L’Engle went on to write more than fifty books after AWIT, making her an inspiring example of productivity after a certain age.

Age—that’s another concern that has had me questioning my writing a romance novel. I have thought that perhaps at my time of life I should turn to women’s fiction or some other genre. Geriatric lit? But L’Engle has words for that concern too. In The Irrational Season she writes, “I must be able to recall exactly what it was like to be five years old, and twelve, and sixteen, and twenty-two, and. . . . For, after all, I am not an isolated fifty-seven years old; I am every other age I have been, one, two, three, four, five, six, seven . . . all the way up to and occasionally beyond my present chronology.”

I printed that quote and added it to my quote board along with another L’Engle quote on the subject from another book, Walking on Water: Reflections on Faith and Art: “Only the most mature of us are able to be childlike. . . . If we lose any part of ourselves, we are thereby diminished. If I cannot be thirteen and sixty-one simultaneously, part of me has been taken away.”

If Madeleine L’Engle were still alive, I’d write her a letter, thanking her for her wisdom and for her books. Since I can’t do that, I’m writing this blog. Perhaps by sharing the lessons I’ve learned from rereading the Crosswicks Journals, some other discouraged writer who is thinking of giving up will be reminded of what makes a writer.

A last quotation from L’Engle, also from The Irrational Season, and one that speaks to every writer: “Writing a book is work; it involves discipline and writing when I don’t feel like writing. Robert Louis Stevenson said that writing is ten percent inspiration, and ninety percent perspiration. The inspiration doesn’t come before the perspiration; it’s usually the other way around. Inspiration comes during work, not before it.”

I’m going back to work, thanks to Madeleine L'Engle.

What writers inspire you? Have you ever read a book that at exactly the right moment?
Posted by Janga at 1:27 AM

What a lovely essay, Janga. I have had that "right book, right time" phenomenon. Though I can't remember any specific ones just now. Love the L'Engle quotes. She was a wonderful author and made some dark times in my childhood more bearable. I'm glad her books are still here, at least.

Every time, Janga. You get me every time.

I was particularly struck by l'Engle's thought: “What matters is the book itself. If it is as good a book as you can write at this moment in time, that is what counts. Success is pleasant; of course you want it; but it isn’t what makes you write.”

Somehow, I think, the internet, w/ all its benefits, has made writers focus ever-more on publication.

When I started writing, back in 1899 or something, I did an early (foolish) round of queries, but for the most part, I thought of Story. Learning to write better. Seeing a scene get better as I revised. Learning concepts like point-of-view and character arcs felt like party streamers in my belly: I was so excited.

Now, I mostly hear about who got pubbed with which publisher, how big an advance was, what accolades or awards have been heaped, or how a query turned out, etc.

And maybe that's easy for me to say, b/c I've got a publishing contract (for now!) And I surely share the desire to self-support via writing, to allow focus on the storytelling.

What I guess I'm saying is, I think we're diminished as craftsmen when what we consider most fervently is our next job.

Thanks, Manda. It's surprising how often L'Engle turns up in conversations and in other people's books. The Wrinkle reference was one of the reasons I liked Stead's When You Reach Me so much. I also loved that it was one of the books in Sweet Pea's car trunk in Jean Brashear's The Goddess of Fried Okra.

I think you're right, Kris. The joy that should be part of creating is lost when we focus on measurable profits and losses.

Ane I too love "practically plural" Progo and all he has to teach about Naming and kything.

Love this: "... a writer is defined by writing, not by publication."

Thank you for this post. It was just the right thing to read at this moment! :)

As for you and your writing, I have NO DOUBT that you will be published. Anyone who can consistently write such lovely posts will most certainly spin a beautiful romance. I can't wait.

Thanks for stopping by, Marisa. I'm pleased beyond words that you found my words helpful. All the best to you with your writing.

Pardon me while I have a fangirl moment. Squee! Anne Gracie read my blog!

Thank you, Anne, for visiting the blog and for your lovely words of encouragement.

This is a beautiful post, and I'm so glad I read it before you got to post your next bit of wisdom!

What an absolutely fabulous blog. I love Madeline L'Engle's work. A Wrinkle in Time is my favorite, but I've read and reread almost everything else she ever wrote. And the words (and subjects) you chose today for your blog -- touched me. And spoke to me. How funny that I'd find it simply by perusing Twitter and seeing it mentioned by someone else there. I decided to start writing romance when I was almost forty. And here I am eleven years later with eighteen books on the shelves. Dreams can come true at any age. And yes... we are the sum total of all of our years. Beautiful blog. Thank you!