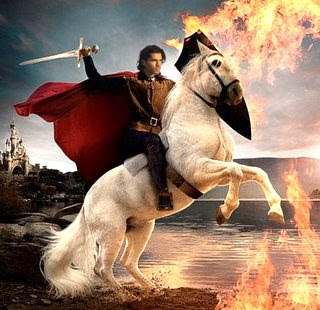 Description has been the topic in a number of online discussions recently, and since describing in too much detail is one of my weaknesses as a writer, it’s also something I’ve been giving a lot of thought to as I work on my own mss. One reader said she didn’t want any description of the character in the novels she read. Physical details, she said, interfered with the image of the character she created as she read. I hope that reader represents a small minority because I don’t think I can write a book totally lacking in hints about what my characters look like. I see them clearly, and I want readers’ views to at least approximate mine.

A couple of years ago I entered a contest, my sole venture on the romance writers’ contest circuit. I edited, proofed, and polished my entry until I had practically memorized the pages. I spent a great deal of time cutting description and other narrative detail. I was surprised when I received my entry back with the judges’ comments that one generous judge who had taken time to comment extensively cautioned me about omitting such details. “Sometimes,” she wrote, “you need to tell, not just show.” Her comment has stayed with me, and I’ve made an earnest effort to find the right balance. I struggle to avoid info dump, and I’m conscious of linking descriptive details to action and dialogue. But I also know such linkage, like any other strategy can be overdone and become just another rhetorical tic.

I spent a great deal of time trying to write a description of the hero of the third book of my trilogy. Exhausted by a dozen attempts that ranged from a single sentence to several hundred words, I did what I often do when I hit walls. I turned to books with descriptions that worked for me as a reader. I limited my research to descriptions of heroes in contemporary romance since that’s what I was writing. Here are four that I studied:

1. He was dressed in faded jeans with slashed knees and a too-tight olive green T-shirt stretched over muscled biceps. Ruggedly tanned, he had sun-streaked russet-brown hair curling past his collar.

It wasn’t that he had a five o’clock shadow at nine-thirty in the morning that screamed “bad boy.” To Rachel’s eyes, that simply made him look scruffy. And most certainly his menace wasn’t in his boots, butter-soft leather and, good Lord, purple?

No, it was the arrogant way he stood, feet planted wide, arms folded across his impressive chest. It was the dragon tattoo curling the length of one muscled arm. But mostly it was the sleepy sensuality in the hooded hazel eyes casually scanning Rachel as if she were part of a female buffet.

Devin Freedman through the eyes of heroine, Rachel Robinson, What the Librarian Did by Karina Bliss, 125 words

2. He was more handsome than ever he’d been as a boy. And the women of the village had talked of his angel face in those days. Now there was a good bit of the devil as well to add impact to those vivid blue eyes and quick, crooked smile.

The outdoor life he led suited him, and over the years his face had fined down to a kind of sculpted leanness that drew women’s eyes. . . His unruly thatch of black hair defied proper combing. His body was tough with muscled arms, broad shoulders, narrow hips.

Murphy Muldoon seen through the eyes of his long-time friend Brianna Concannon Thane in Born in Shame by Nora Roberts, 98 words

3. In a thick plaid mackinaw jacket, faded jeans, and snow boots, he looked like a character from a storybook—the noble woodsman. A prince in disguise. I’m in a Disney movie, she thought.

4. Everything about him radiated strength and darkness. Eyes, hair, energy. A dangerous archetype. Like Hugh Jackman in X-men, minus the claws, facial hair, and super powers.

Mark Bressler through the eyes of heroine, Chelsea Ross, Nothing But Trouble by Rachel Gibson, 26 words 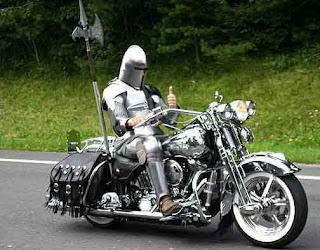 After looking at these and several more, I returned to my attempts and reevaluated. This is the one I decided to use:

Caleb looked enough like Max to be his brother. Both were Marshalls bred true. They had the long legs, broad shoulders, and large, graceful hands of all the Marshall men. And the eyes . . . Lauren had those eyes—Marshall blue, Dori called them, a blue that verged on purple but never quite made it. But Max’s eyes were often lit with laughter or soft with thought. Caleb’s gave less away. They dared the world. The small, crescent-shaped scar on his right cheekbone and the scornful curve of his mouth assured that he’d never be confused with Max. Caleb might ride to the rescue, but it would be on his terms and on a bad-boy Harley, not a white horse.

Caleb Marshall through the eyes of heroine, Zan Killian, 121 words

My first response to your examples is to beg for more Caleb...NOW! Seriously, Janga. He sounds fabulous!

As for what I want from an author in the way of description, I like a general idea of the hero's physical description (all the better if it's through the heroine's eyes) and personality but not so much that I find myself saying, "Enough, already!" Give me the basics then let me discover the rest through his actions and interactions with the heroine and other characters in the story.

Btw, that excerpt from the Karina Bliss book has me wanting to read it, pronto!

Thanks, PJ. Caleb is my hero who was never inteded to be a hero. He just took over and demanded the role. :)

And you definitely should read What the Librarian Did. It's a terrific read!

Your example was EXCELLENT. I can see him perfectly, but it's not too much detail nor too little. Just perfect.

The "published" examples (that doesn't seem like the right phrase since your example is PUBLISHED on your blog) are great too. :) I think you did excellent research. I believe writers should read the type of books/authors they want to publish in, to get a feel of their contemporaries, know what works...

Thanks for the kind words, Hellie. I too think studying the best in your subgenre is the most valuable kind of study. I learn things this way that I'd never learn from all the general craft books.

Great post! I love describing the hero and heroine in detail. Minor characters only get brief, very telling details. I also only use a few particularly memorable details to describe places. For example, one scene I wrote happened at the opera, so I used an interesting detail I found in my research of the actual place. I try to keep these details short as I'm not particularly interested in reading long descriptions of places.

I like it when an author describes the character enough that I can see him/her in my mind's eye, but not so much that it's overkill.

Love that you included the description of Murphy! One of my favorite Nora heroes!

I think its 'horses for courses'.

If a writer has a vivid image of a character or landscape, and the talent to translate into stunning bubbling prose, then I want to read about it.

Not everyone has an eye for description though, and the consequent prose can sometimes seem forced.In that case I think it better to concentrate on aspects of the plot that bring the prose to life. Focus the writing on areas where the talent shines brightest.

I liked all of the examples. They demonstrate that good description does not depend on the number of words used.

Just as with painting, a few broad brush strokes by Picasso eg in 'Madame Z' can be just as effective as the intricate brushwork of Turner eg in 'The fighting Temeraire'. They are both magnificent, but different!

I particularly like description as seen through the eyes of an important character. It gives important insights into the character as perceived by the observer. For example
But Max’s eyes were often lit with laughter or soft with thought
shows Zan's personal perspective and interest.

Interesting Janga. Caleb and Zan sound fascinating.
Thanks for the clip! *smile*

Hi, Vicky! Thanks for stopping by. Balance is the key, I think. I agree that secondary characters don't require as much detail, but I have great admiration for writers like Eloisa James who have the knack for selecting a single detail that tells the reader a great deal.

Hail, Gannon, my fellow Murphy-lover! LOL! He is one of my favorite heroes in all of Romancelandia, one I fall more deeply in love with every time I reread the Born in trilogy. I suspect our response to him means La Nora got the details just right. :)

Glad you like Caleb and Zan, Q. And I think your painting analogy works well on many levels. A lot of people who admire Turner dislike Picasso (and vice versa), but their response is just a matter of taste. Both artists are masters.

Thank you! These are great examples. I can tell you that as a reader, my pet peave is the old standard "He had a rugged face". I need a bit more detail so I can mentally cast the character, and I'd like to see it as soon as possible in the story. I read a book recently were I didn't even know the character's hair color until two thirds of the way thru! By then I had given up and done my own casting, and had to disregard the writer's description altogther.