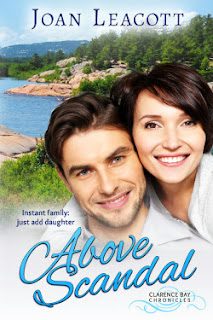 After an eleven-year absence, Cathy Rossetti returns to Clarence Bay to find her hometown has changed little. But Cathy’s life is very different from that of the pregnant teenager who left when her mother turned her back on the daughter determined to bring scandal on her family. Cathy graduated with a double degree from the University of Toronto, and she is now Director of Accounts Management for a large investment firm. But professional success is not the most significant change. That title goes to ten-year-old Haley, the daughter Cathy refused to give up for adoption, the daughter who has been a well-guarded secret from Cathy’s conservative Italian family and from the man who fathered her daughter.

Ryan Chisholm is in the middle of a campaign for mayor, fighting not only to win an election but also to be an honest politician committed to transparency in government, the very opposite of the policies of the town’s former mayor, Ryan’s father, a pragmatic politician for whom backroom deals and back-scratching methods were standard procedure. Ryan has never forgotten Cathy Rossetti, and he’s never understood why she disappeared from his life without a word. Just the sight of her is all it takes for him to realize she still affects him as no other woman ever has, and he’s charmed by her bright, outspoken daughter.

Small towns can be warm and welcoming, and Cathy finds it surprisingly easy to renew old ties with the friends of her youth. She also finds it all too easy to fall back into the familiar pattern at home: the close, affectionate relationship she shares with her aunt and the antagonistic, angry relationship with her mother. Always in her mind is the necessity of telling Ryan about Hayley. Cathy is still convinced she did the right thing in not telling Ryan, she still believes that their lives are too different for them to ever make forever work, but she knows Hayley and Ryan deserve to be part of one another’s life.

Small towns can be hotbeds of gossip, quick to judge and to revel in scandal. The identity of the father of Cathy Rossetti’s daughter is one juicy scandal, but it’s only one, and not the most shocking secret, that will threaten the Rossetti and Chisholm families before Cathy and Ryan find their way past all the obstacles to their HEA and Hayley finds a family larger and more loving than her dreams.

Joan Leacott’s Clarence Bay Chronicles is among the newest entries into the popular small-town romance genre. Above Scandal is the first book in the series. The Canadian setting makes it a standout, and Cathy and Ryan and their tangled relationships give readers an interesting story. I like novels rich in context, and Leacott generously provides that. In addition to the complex familial relationships are a host of minor characters who lend credibility to the central characters and their place in Clarence Bay. The secret baby plot is one often used in romance, but Leacott gives it a twist that will catch some readers by surprise.

On a less positive note, the dialogue sometimes came across as graceless and far removed from actual speech. Such responses are, of course, subjective, and other readers may find this quality less distracting than I did or disagree with my description. I also thought some passages were lavender tinged, but that too is a subjective call. Readers who are looking for a small-town romance series that offers an unexpected setting and a mix of characters who combine human flaws with endearing qualities may want to give Above Scandal a try.

I’ve read a number of historicals set in Canada, and I grew up reading and rereading Lucy Maud Montgomery’s books. But I haven’t read many contemporary romances set in Canada. Am I missing books? What contemporaries with Canadian settings have you read?
Posted by Janga at 10:48 AM

I've read a couple of romantic suspenses set in Canada by Toni Anderson and Vivian Arend, but can't think of any straight up contemporary romances.

I can't either, Jane, but I'm sure there must be some. I have a vague memory of reading a Harlequin Superromance set in Canada not long ago, but I can't recall a title or author.

Janga, Thank you for a warm and thoughtful review. I'm so glad you appreciate my characters and my setting.